“The Gesture of Drawing Light with a Body Movement, Form 24” work is presented at Ars Electronica festival in the form of installation object. The photo-camera is carrying the digital graphics or, digital drawing (link here), produced during interactive performance in 2013 (link here). 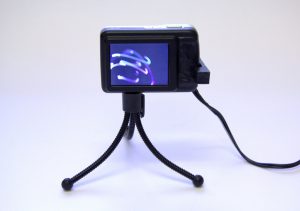 The gesture of drawing light with a body movement, Form 24 is a series of pictures saved on a portable digital photo-camera. The sequence is played in a loop on the screen and becomes a sort of a unitary video. Initially the pictures derive as abstract graphics digitally produced in an interactive performance. Wearing a stretchable suit embedded with eight Ipods, the artist is involved physically, presenting human-computer interaction on stage.  As the video unfolds, the frames reveal their analogue origin. With the final frames it becomes possible to grasp the presence of the body of the artist, which uses a simple technique, the gesture of drawing light with body movements, to extend the media into the perception of the audience. 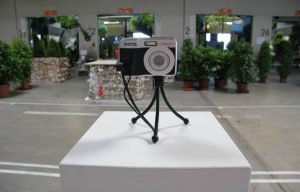